Every year around this time, my family gets in the holiday spirit with a little cocktail competition – everyone makes a drink and we anonymously vote on the best one. It’s friendly, but don’t be fooled, we take our cocktails pretty seriously. No one is making Jack and Cokes around here…

We keep our recipes secret, not even sharing the chosen liquor, until unveiling the line-up the night of the competition:

This is a bit extreme, but I’m a bit Type A, so we even had official voting cards last year:

Rob Roy: The winning drink! My dad won the competition with this STRONG Scotch cocktail. It’s basically a Manhattan made with Scotch. He played the crowd well, catering to the MacKay’s Scottish heritage!

Beergarita: My mom says she under-performed and wishes I’d leave it out from the list…but I’m a tequila lover and still thought this was a fun drink!

French 75: The epitome of champagne cocktails! It was created in a New York bar in Paris during World War I and was said to have such a kick that it felt like getting shelled by a French 75mm field gun.

Buttery Nipple: This was the first time someone made a SHOT! My sister wasn’t going to enter last year, but on the day of competition, inspiration struck! 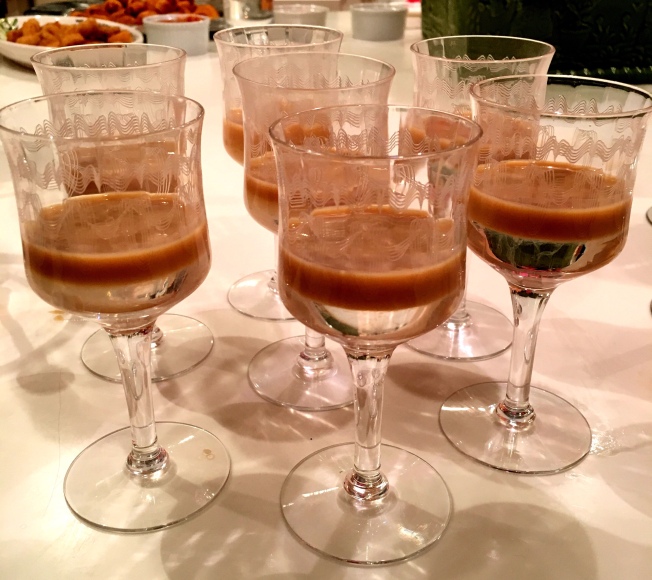 Clover Club: I took my chances with a gin drink…and secured 2nd place for the 5th time! One of these years…The raspberries make it a bit fruity, but the vermouth and egg white keeps it tart and dry. This cocktail is named after the Clover Club, a gentlemen’s club in Philadelphia founded in the 1880’s, whose membership was made up of the intellectual elite of the time.

Pour everything into a cocktail shaker and shake first without ice for 20 seconds to emulsify the egg white. Then, add ice and shake until chilled. Strain into a glass. (For presentation points, spear some raspberries on a pick to lay across the rim of the glass.)

*To make the raspberry simple syrup: In a saucepan, smash 1 cup of berries into 2 cups sugar with the back of a spoon. Then, add 1 cup water and heat on low until the sugar is dissolved (don’t let it boil). Let the syrup stand for 20 minutes before straining. Make this ahead of time so that it has time to cool. It will last 2 weeks in the refrigerator. OR muddle 5 raspberries in 1/2 oz of plain simple syrup.