Last weekend some friends and I went down to San Diego to Stone Brewing’s annual Beer Fest. Is there any other way to celebrate Andrew Maze’s birthday?? I can’t think of one! With the price of admission, you get an official Beer Fest glass and 10 tickets to sample beers from over 40 different craft breweries of Southern California.

Because it was so hot and you are sampling paaa-lenty of beer, a co-worker of mine suggested making pretzel necklaces to snack on while you walk around. You guys, these necklaces were a HUGE hit! You would’ve thought we were celebrities the way everyone was pointing at us! And we’ve never talked to so many strangers! In order to make them extra special, I made them “birthday style”. This is how simple it is: cut some ribbon long enough to slip over your head, string on some pretzel twists, and tie a knot! 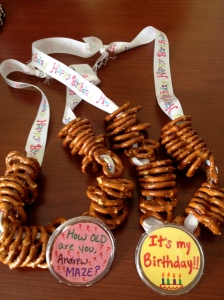 I made mine a little more special by adding home-made birthday buttons. Andrew had so many people wishing him Happy Birthday because of his button. Lots of people wanted in on the snacks.

Aside from a beer or wine tasting, I’ve been trying to think of what other events could be greatly improved by the additional of pretzel necklaces. I keep coming back to college keggers, tailgates, things of that nature….Apparently anytime there is drinking involved, pretzel necklaces should be incorporated!